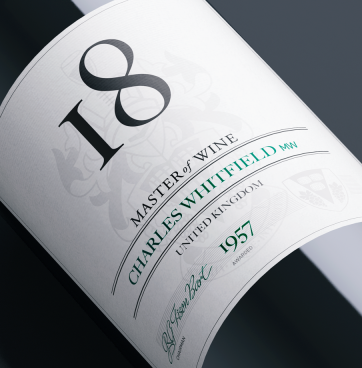 Charles was a cheerful cockney character who brought a ray of sunshine into everyone’s life. His early career was served in the Metropolitan police. Later he was employed with Whitbreads Brewery and became a wine and spirits executive. He was a past chairman of the Institute and organised the Institute’s first visit to Portugal.

At the end of September, the wine trade was shocked and saddened to learn of the death of one of its key members, Charles Whitfield, following a massive stroke.  He had much success during his long career and championed many good causes, but he will be remembered above all for his marvellous sense of humour, his great kindness, and his generosity.

Charles began his career as an office boy with Balls Brothers at the age of 17.  He rose to Sales Manager in the 1930’s.  During the war, he served in the Police War Reserve and then in the RAF, first as an aircraft engineer and then a Flying Officer with an Air-Sea rescue squadron attached to the Special Air Service.

In 1946 he returned to Ball Brothers, but was  head-hunted two years later by the Whitbread group, becoming first Chief Buyer of their wine subsidiary Stowells of Chelsea, and then, in 1958, a Director.  He was a major force behind the success of Stowells, and in 1972 became Sales Director of their National Trade Division.  Many well known trade members trained at Whitbread under his keen guidance.

Charles was one of the first to pass the Master of Wine Examination in 1957, and from 1960-61 he was Chairman of the Institute.  He remained an active member until his death, helping particularly with exam invigilation.  In 1995 he took part in a long haul MW trip to South Africa on which several newly qualified Masters met him for the first time and were charmed by his wit, energy and good humour.  Despite a serious fall he stoically completed the busy itinerary without complaint.

He served on many wine trade organisations including the Council of the Wine & Spirit Association.  He was Chairman of the Wine Development Board from 1969-70. In 1962 he was made a Commandeur des Confrérie des Chevaliers du Tastevin and, in 1975, he became a Chevalier de l’Ordre du Mérite Agricole.

After retirement from Whitbread, he was for several years a member of the Wine Standards Board, and was its Chairman from 1967 to 1973.  His efforts here earned him the MBE for services to wine.  He typically described his position there as “Chief of the Fraud Squad”

After the death of his wife, he spent his remaining seven years with his partner, Charlotte Lessing.  They had known each other since 1959 when she was doing PR in food and wine.  He had told her many years before that they would end their lives together.  Charlotte was happy with this on condition that he promised her a good cellar.  When the time came, rumour has it that he arrived without even one bottle! They spent much of their few years together travelling the world, and, in Charlotte’s words, “he was busy and happy until the last moment”.