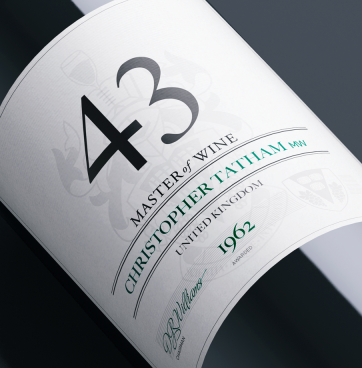 Obituary in The Times, 1 July 2006, kindly provided by his son in law, Rupert Wolheim MW

Christopher Tatham was a scrupulously honest and innovative wine merchant, broker and chairman of the Institute of Masters of Wine, whose career formed a bridge between the old wine trade and the new.

Christopher Trevor Caton Tatham was born in 1924, the son of Ralph Tatham, a solicitor with the London firm of Church, Adams and Tatham. He was educated at Winchester, an experience he disliked, but he enjoyed playing football and was later to play the game for his regiment.

He left school in 1942 and went into the Kings Royal Rifle Corps (60th Rifles). He was demobbed in 1947 with the rank of captain.

There followed a period of indecision about his future. He spent a year at Chelsea Art School before becoming an articled clerk, but abandoned plans to join the family firm when he took a job as an unpaid cellarhand at Findlater, Mackie and Todd in 1951. He stayed six months and was smitten with wine. He joined Barton & Guestier in Bordeaux in 1952 where he chiefly recalled magical weekends spent at Château Langoa with the late Ronald Barton and the glorious wines they drank.

The old trade was another country. Very few wines were exactly what they said they were and Tatham had to learn to blend regions and vintages as well as repair those wines that fell apart when shipped in cask. Very little wine was transported in bottle then. Expertise in these matters was one of the calling cards of the early Masters of Wine, who were supposed to be able to manage the technical side of the business as well as deal with clerical duties such as shipping into bond and excise.

Tasting wine was the icing on the cake. When Tatham joined the Institute of Masters of Wine in 1962 the image of the MW was anything but the media-cuddly one it sports today. Tatham was chairman of the IMW from 1982 to 1983.

Malpractice was increasingly irksome to the honest Tatham. He boasted it as his achievement in the wine trade to have made sure that Beaujolais was Beaujolais, and not a blend of Beaujolais with some stainer from the Languedoc or North Africa; that Chablis was Chablis and that all wine – even the cheapest – should be delicious. He had no time for crooks, fools or bad wines, which did not necessarily make him popular in the business. He once warned a friendly client “’If you ever deal with that chap I’ll never sell you any more wine”. On one occasion his probity led to his downfall and he lost his job as a result. He remained an unruly spirit in all he did. He was a convert to Catholicism and was increasingly religious at the end of his life.

Tatham won the Michael Gordon-Clarke Scholarship in 1956 and spent four months travelling in Germany, Alsace, Champagne and Oporto. With Bordeaux, Burgundy and sherry, these regions represented more or less the total extent of the British wine trade in those days. No one would have admitted to knowledge of the New World at that time.

Tatham was with the Wine Society from 1958 to 1972, where he was possibly at his happiest, once he had divested himself of his managerial role and could concentrate on buying. During his time he instituted the writing of tasting notes to describe the wines on the Society’s list. In this he was aided by a young Clive Coates, who was to make his name as a wine writer.

He was lured away by another company but did not stay long as once again he was shocked by their business practices. In 1974 he created Christopher Tatham Fine Wines and in 1982 he became a broker, first with Thierry & Tatham and latterly with Elliot & Tatham, helping to popularise a number of new French regions such as the Loire and the South West, which were not well-known then. He championed growers such as Vacheron from Sancerre, and Beaudet in Beaujolais, as well as regions such as Jurançon and the Côte Chalonnaise. In 1994 he retired, handing his agencies over to the Oxford based firm of Stevens Garnier.

In retirement Tatham reverted to the would-be artist of his Chelsea days. He painted and was a talented cabinet maker. He also groomed candidates for the Master of Wine exam and treated them with the same avuncular kindness which struck all those who met him.

He was never pompous and many were impressed by his quick wit and vast knowledge, not just of wine, but of literature. Others mention the tremendous distance he was able to spit; but he did not always look at the spittoon and woe betide anyone who came between him and the vessel during a tasting.

He married Regine Legge in 1950. She survives him with their one daughter and three sons.