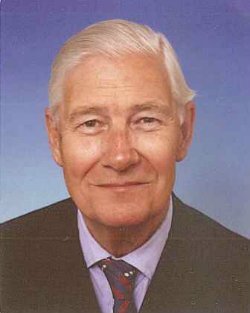 David Stevens MW, who was born on 8 January 1928, was educated at Sherborne and served with The Queen’s Royal Regiment (West Surrey) in the Far East in the immediate aftermath of WW2. He left the regular Army in 1948, although he then served with 23 SAS (formerly IS9, and before that MI9) as a Territorial Army Officer up to 1960.

In 1949 he joined the wine importing firm of Rigby and Evens Bristol and Liverpool (founded 1796) as a trainee salesman.

After seven years in Bristol he was sent to the Liverpool end of the business, and took over the running of it in 1963. A year later Rigby and Evens Bristol and Liverpool were taken over by Matthew Clark and Sons Plc, and in 1966 he was appointed to the board of the company. He left Matthew Clark in 1982 to start his own consultancy business, and one of his first clients was the St. Austell Brewery, who he was to advise for the next twenty years.

During the seven years that he occupied this position, the Membership of the Institute increased by 50 percent, of whom nearly half were from outside the UK. During his term of office he set up study courses in the United States, Australia, and mainland Europe, and broke with tradition by making arrangements for the Examination to be held simultaneously in London, New York, and Sydney. He also introduced Advisory Boards in Australia and the United States, and chaired the latter.

David visited all the major wine producing countries of the world, in all of which he had many friends and acquaintances. He also planned and led four of the Institute’s official trips: to Australia in 1983; South America in 1989; New Zealand and Western Australia in 1993; and South Africa in 1995.

David Stevens MW is widely credited with being the first to discover the importance of Argentina as a source of good, inexpensive wine and was recognised as a leading expert on the wines of this country, and of South America in general.

He was on the Wine Committee of the International Wine and Food Society for 25 years, and was a Commandeur of the Confrérie des Chevaliers du Tastevin and a member of the Commanderie du Bontemps de Médoc et des Graves.