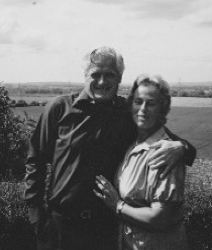 Laurence Webber MW died on 6 February 2019. He was 95. Laurence became an MW in 1965, celebrating his 50 year anniversary as a Member in 2015. Laurence was an active member of the IMW, including being on Council in the 1990s and involved in events, examinations and education. Born in 1924 in Finchley, North London, Laurence was one of three brothers. Both his mother and father served in the First World War and Laurence and his older brother, Neil, served in the Second World War. Laurence was in the RAF and organised logistics and relief work in Berlin and Warsaw in the immediate aftermath of the war. After leaving the RAF, Laurence joined a small, specialised vintner, Greens, located near the Royal Exchange in the City of London. He was there for 11 years, working his way up the ranks from the cellars to sales and marketing. He then joined Percy Fox wine shippers where he managed many accounts, including Jean Thorin Burgundy, Lanson Champagne and Warre’s Port. It was during his time at Percy Fox, he took, and passed the Master of Wine examinations. Laurence assumed the helm at Lanson UK in the early 1980s and was based for a while out of the Savoy Hotel in The Strand. He retired some 10 years later. In retirement, Laurence remained active on the golf course and as a Friend and photographer at the National Trust, who published his images, especially of Stowe House. He is missed by his loving wife Nona, to whom he was married for 60 years, his three children and six grandchildren.