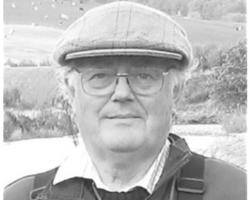 After National Service and Cambridge, where he was secretary of the Cambridge University Wine & Food Society, he spent a miserable time in Barclays Bank, before being persuaded by Harry Waugh to join John Harvey & Sons Ltd. of Bristol, where for the next eight years he learnt the wine trade.

Robin became an MW in 1965 and the same year left Harvey’s and started Hicks & Don, joining forces with Ronnie Hicks MW and remaining a director of the business until 2002.

In the meantime he planted Elmham Park vineyard in Norfolk, where he made and sold 25 vintages, before concluding that the short length of the Norfolk viticultural growing season could not deliver regular enough yields to make commercial sense.

Many Masters of Wine have shared fond memories of Robin, and his proclivity for composing bawdy songs and poems during the many MW trips he enjoyed over the years. We would have loved to share them, but they were too risqué for a wide audience!

Over the years I met Robin on numerable occasions, regularly at English Vineyards Association (EVA) board meetings after I joined as a director in around 1982, and at numerous MW events and trips. I will never forget the first EVA board meeting I attended when he came up to me and said “but what do you do for a living old boy” seemingly blind to the idea that anyone could expect to grow grapes and make wine in England as a career! How times have changed. Robin was always good for a quip, a limerick when called for, or a story from his past. Watching the German airship Hindenburg from the roof of Britain’s embassy in Berlin was one story I recall him telling me. It was just before WW2 when his father was air attaché at the embassy. I was also told a story by an old colleague of his from his Harveys of Bristol days which Robin confirmed was true. On occasion he would drive to work in his father’s Rolls Royce and park it in the staff car park. The M.D. felt rather put out by one of the most junior employees using such a lavish car to get to work that he was asked to park it round the corner in future, out of sight!