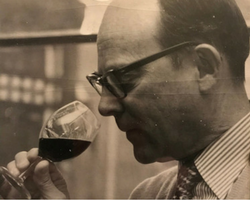 Bill had been a Member of the Institute since 1960 and was Chairman in 1972. He was born in central London and educated privately. In 1945 he was commissioned from Sandhurst and served in the Royal Lancers in Egypt and Palestine. Bill left the army in 1947 and joined Silva & Cosens (Dow’s Port) in 1948 working in Portugal, Burgundy and Bordeaux, before settling in London at Dow’s agents until 1973. Bill retired from Symington Family Importers John E Fells & Sons aged 65 in 1991.

I remember Bill as being one of the more helpful and willing of tutors, a modest man full of knowledge and wisdom, with a warm and ready smile and a gentle sense of humour. He was a credit to the Institute.

In his prime, Bill was one of the most memorable and most characterful of Members and old wine trade chums who knew him will greatly miss his wonderful sense of fun and good humour.

I hope among the reminiscences you have received, is the epic one of Bill on the MW trip to Tuscany in the early 90s. One visit to an eminent Chianti estate coincided with the Grand National. Bill being a man with a liking for gee-gees in no time hijacked the visit by organising a sweepstake and then all of us adjourning to the house to watch the race live on TV. I seem to recall the horses were picked out of Bill’s venerable Panama! Our Italian hosts seemed to take the whole thing in their stride or were far too polite to say otherwise! A great character who will be much missed.