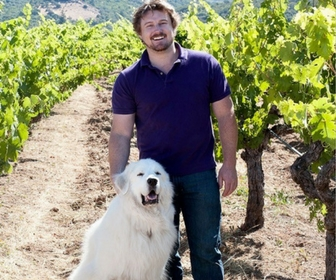 Morgan is the winemaker and owner of Bedrock Wine Co. in Sonoma, CA - a winery dedicated to preserving and rehabilitating old vineyards across the state of California. Morgan was exposed to wine tasting at an early age; in David Darlington's book Angel's Visits, it is noted that 'Morgan, at the age of five, could distinguish between Merlot and Zinfandel.' Under the tutelage of his father, Ravenswood's Joel Peterson, Morgan began making small lots of Pinot Noir at age five from fruit given to him by the Sangiacomo family. Educated at Vassar College and Columbia University, Morgan started Bedrock Wine Co. in 2007 following stints in Australia and Bordeaux. Bedrock wines have been featured in many major publications, including The New York Times, The Los Angeles Times, The Wall Street Journal, The Washington Post, Decanter, Food and Wine, Town and Country, and many more. The Bedrock Heritage Wine, which comes from the Peterson family's 129-year-old Bedrock Vineyard, has been featured three times in Wine Spectator's Top 100 List, placing as high as #13. In addition, the winery has received a score of 90 points or higher from Wine Spectator over 60 times. In 2014, Morgan was named The San Francisco Chronicle's Co-Winemaker of the Year by Jon Bonn�. Robert Parker stated, after giving the winery its first two 100 point scores, that 'Everybody should recognise the incredible speed at which Morgan Twain-Peterson has built his Bedrock Wine Co. into a world-class performer.' Morgan is also co-owner of Under The Wire, a sparkling wine project dedicated to making single-vineyard, m�thode Champenoise wines. Morgan is happiest when walking his vineyards with shears, obsessing over biological controls and biochar, and tasting through barrels. When he's not making wine, drinking wine, or thinking about wine, Morgan can be found picking tomatoes in his garden, hiking around Northern California, and annoying his friends with trivia about John Prine and Waylon Jennings.