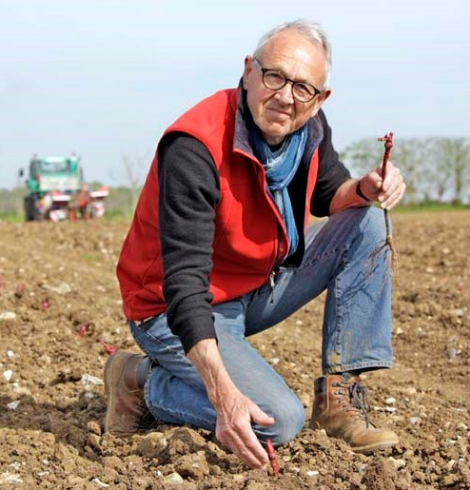 Stephen Skelton has been involved with growing vines and making wine since 1975. He spent two years in Germany, working at Schloss Schönborn in the Rheingau and studying at Geisenheim, the world-renowned winegrowing and winemaking college, with the late Professor Helmut Becker. In 1977 he returned to the UK to establish the vineyards at Tenterden in Kent (now the home of the UK’s largest wine producer, Chapel Down Wines), and made wine there for 22 consecutive vintages. From 1988 to 1991 he was also winemaker and general manager at Lamberhurst Vineyards, at that time the largest winery in the UK. He now works as a consultant to vineyards and wineries in the UK and is currently setting up vineyards for the production of sparkling wine. In 1986 Stephen started writing and lecturing about wine and has contributed articles to many different publications. In 1989 he wrote (and published) his first book, The Vineyards of England and in 2001 his second, The Wines of Britain and Ireland (Faber and Faber) which won the André Simon Award for Drinks Book of the Year. This was followed by three editions of the UK Vineyards Guide (2008, 2010 and 2016), Vine Varieties, Clones and Rootstocks for UK Vineyards (2014) and Wine Growing in Great Britain (2014). His latest book is The Wines of Great Britain (2019), one of the titles in the Classic Wine Library series. He has also written Viticulture – A guide to commercial grape growing for wine production which is aimed at Master of Wine (MW) and WSET Diploma students, plus anyone considering owning or establishing a vineyard anywhere in the world. Viticulture was originally published in 2007, but was revised and updated in 2019. He also writes on English and Welsh wine for Jancis Robinson’s Oxford Companion to Wine and Hugh Johnson and Jancis Robinson’s World Atlas of Wines. Stephen was a director of the English Vineyards Association (EVA) from 1982–1995 and of its successor organisation, the United Kingdom Vineyards Association (UKVA) from 1995–2003. He was Chairman of the UKVA from 1999–2003. He was also at various times between 1982 and 1986 Treasurer, Secretary and Chairman of the South East Vineyards Association, Secretary of the Circle of Wine Writers between 1990 and 1997 and has served on various EU committees in Brussels representing UK winegrowers. In 1999 he took three years off from the wine business to do a BSc in Multimedia Technology and Design at Brunel University. While at Brunel, Stephen was awarded the Ede and Ravenscroft Prize. In October 2011 he received an Honorary Doctorate in Business Administration from Anglia Ruskin University. In September 2011 he completed an MA in Life Writing (Biography) at the Creative Writing Department of the University of East Anglia. In 2003 Stephen became a Master of Wine, winning the prestigious Robert Mondavi Trophy for gaining the highest marks in the Theory section of the examination. In 2005 he won the AXA Millésimes Communicator of the Year Award for services to the MW education programme. He served on the MW Education Committee from 2003 – 2009 and was the education course wine coordinator. In 2009 he was elected to the Council of the Institute of Masters of Wine and served on it until 2016. He is now Chairman of the MW Research Paper Examination Committee and Panel Chairman for the English and Welsh wines for the Decanter World Wine Awards.